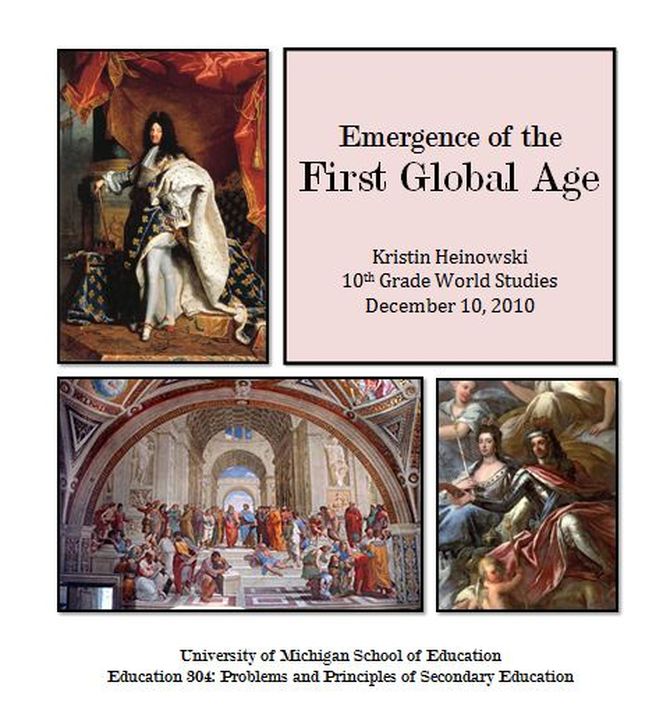 This unit, entitled “Emergence of the First Global Age”, will examine the changes different civilizations face when coming in contact with each other. During this unit, with topics such as the Renaissance, the Columbian Exchange, mercantilism, and the Protestant Reformation, students will explore the benefits and conflicts that come with globalization and the first global age. For example, students will evaluate whether the Columbian Exchange can be considered a positive event because of the exchange of foods and goods, when so much of the native population was killed due to disease brought by the Europeans. Students will be exploring these types of topics through lectures, video clips, class discussions, reading primary sources, and forming their own interpretations of history.

This unit directly follows a unit based on regional and interregional interactions; thus, students will already have a firm understanding about the impact of different societies and civilizations interacting with one another. Students will already have an understanding of cause-and-effect relationships and knowledge about different civilizations around the world. This next unit will take their understanding to the next level, as students look at history from a global perspective rather than from a smaller, regional scale.

This unit focuses on global interactions between different societies, as well as the changes and conflicts that emerge as a result. Students will explore the consequences of global interactions and will recognize how these interactions have shaped our history and our world today. Students will examine questions like, how do religious conflicts like the Crusades and the Spanish Reconquista from hundreds of years ago relate to the tensions and disputes between the Middle East and the Western world today? Or, how did ideas sparked by the Renaissance lead to the development of democratic governments and religious freedom? Although students tend to view history as something that happened in the past, this unit will prompt students to see the larger implications of history and to recognize trends that still continue today. Essentially, by understanding how the global age first emerged, students will have a better understanding of current events and how various societies in today’s world interact and influence one another.

Until this point in the students’ study of history, student learning has been primarily focused on regional societies; for example, in middle school, students looked at each of the ancient civilizations, and in eighth and ninth grades, students took a two-part class that focused entirely on American history. This unit will push students’ understanding to the next level and will prompt them to look at history from a global perspective, recognizing how various societies change and influence one another.

Students will have some prior knowledge of the material covered in this unit; however, this prior knowledge may get in the way of student learning. For example, there are many misconceptions surrounding the topic of Christopher Columbus and his “discovery” of the New World; from a very young age, students are presented a gilded version of this topic and are not aware of the controversies surrounding the Columbian Exchange.  Similarly, many of the students in this community come from Christian religions and know about the views of Protestant leaders like Martin Luther and John Calvin; it is important for students to put aside their own religious beliefs and to study events like the Reformation objectively. This will prove to be a challenge to the students’ learning of this material, as they will need to shed any misconceptions they have and uncover new facts and interpretations.

Typically, students in my World Studies class complain that the subject of history is “boring” or “doesn’t matter”. To them, history is a long list of events and dates for them to memorize. To make history more engaging to students and to connect the material to students’ lives, I believe that it is important to structure the unit with a series of questions for students to examine and explore. To do this, I will be framing each lesson with a question, which the students will respond to during their Bellwork Activity. By prompting them to answer these questions, students will be exploring historical material, examining evidence, and forming their own interpretations and opinions. Then, history becomes more than just dates and events; it becomes problems for the students to solve, stories for the students to uncover, and circumstances for the students to interpret and relate to.

Enduring Understanding
By the end of the unit, students will have learned the following “big idea”:

Unit Problem
During this unit, students will explore and investigate the following problem:

How do civilizations change when they come in conflict with each other?

Key Concepts
During this unit, students will learn and understand the following concepts:

3. Humanism: “a Renaissance intellectual movement in which thinkers studied classical texts and         focused on human potential and achievement.”

Students’ understanding of this concept will further their study of the ideals of the Renaissance, as well as         the motivations to reform the Church during the Reformation and to expand their world during the Age of         Exploration.

4. Columbian Exchange: “the global transfer of plants, animals, and diseases that occurred during         the European colonization of the Americas.”

Students will identify this concept as a significant impact and result of the Age of Exploration. The                     Columbian Exchange transformed the world socially, economically, and biologically.

5. Mercantilism: “an economic policy under which nations sought to increase their wealth and                 power by obtaining large amounts of gold and silver and by selling more goods than they bought.”

Students will learn how this concept shaped the Age of Exploration, providing motivation for European                 countries to explore and colonize the world, in search of gold and silver, raw materials, and new markets.

7. Globalization: “the transformation of the world through increased hemispheric interactions                 through new networks of trade, cultural diffusion, and the spread of religions.”

This concept will frame students’ understanding of the entire unit, as they examine how the world began to         change due to increased global interactions.

Informal assessment will occur daily during this unit. Each day, class will begin with a bellwork activity, where students will answer a free-response question. These questions will be based off of the lesson’s thematic question and will prompt students to think critically about the material from the beginning of class. Each day’s question will build off of the previous day’s material, checking for understanding and introducing new concepts and ideas. Bellwork will be collected weekly so I can look for comprehension of the material, identify any misconceptions, and provide feedback.

The daily response questions are as follows:

1.       What does it mean to be “global”? What kinds of things make us global today? Could the world in the               1500s possibly be considered “global”?
2.       What makes some empires stronger than others?
3.       How does the empire you researched compare and contrast to the empires we’ve previously studied?
4.       Why isn’t Japan grouped together with the other Asian empires? What makes Japan different?
5.       Should Medieval Europe be considered the “Dark Ages”? Why or why not?
6.       What do we learn from art? What does art tell us about a society?
7.       After reading The Courtier, what specific characteristics should a courtier possess? How do these                       characteristics correspond with the ideals of the Renaissance and humanism?
8.       What are the values of humanism? How would these values prompt people to have concerns about the               Catholic Church?
9.       What specific changes to the Church did Martin Luther call for?
10.   What possible rewards and risks might come from exploring the seas for new lands?
11.   What were the motivations for China and Japan to reject European outreach?
12.   What would be the positive and negative impacts of exploration and global exchange?
13.   How is the movement of goods, people, and ideas in this unit different from the previous unit?
14.   View the portrait of the king of France, Louis XIV. Describe what you see in the portrait. What message             does the portrait convey? What predictions can you make about Louis XIV and his style of ruling?
15.   What might people gain from having a ruler whose power is absolute? What are the drawbacks of having         an absolute ruler?
16.   How does the leader of the country you are researching fit the definition of an absolute monarch?
17.   What factors might weaken the power of an absolute monarch?
18.   What is different about England? Why isn’t England considered an absolute monarch?

a.      Two quizzes throughout the unit
b.      A unit multiple choice test at the end of the unit
c.       A document-based question (DBQ) essay
d.      An authentic assessment in the form of a newspaper research project

Objectives:
1. This assessment asks students to research an absolute monarchy. Through this research, students will be able to determine the three critical attributes of the concept absolutism (complete power, no checks and balances, and divine right).

3. The final stage of this assessment will be for students to present their newspapers. By presenting, students will be able to explain the key elements of their absolute monarchy, picking out the important details. 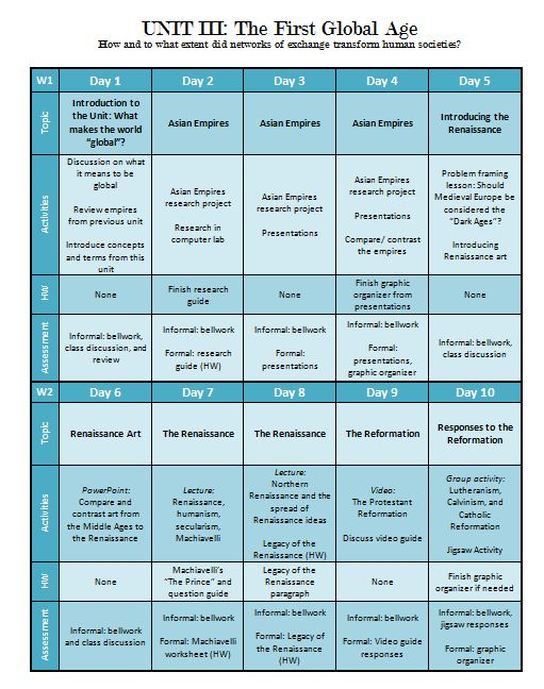 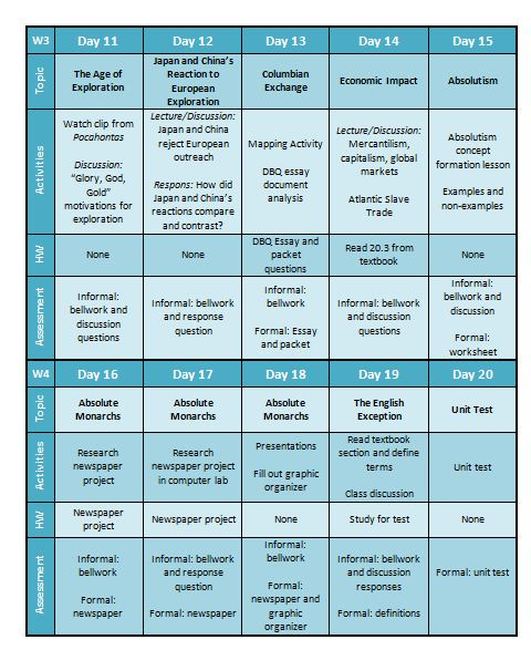 To see my reflection of the unit, click here.

To see examples of student work from this unit, click here.
Work Cited

Jakubowski, C. (2002). The Columbian Exchange and Reaction DBQ Essay . Retrieved November 10, 2010, from Center for the Teaching of American History: http://ctah.binghamton.edu/

School of Athens. (n.d.). Retrieved October 27, 2010, from The Artchive: http://www.artchive.com/artchive/R/raphael/school_athens.jpg.html

Unit 3: Emergence of the First Global Age. (2010). Retrieved October 2010, from World History for Us All: worldhistoryforusall.com