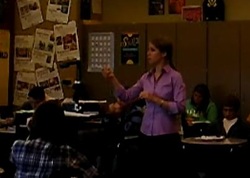 Problem of Practice: Being a Responsive Teacher

Despite my best efforts and intensive planning, this lesson was not as successful the first time I taught it as I thought it would be. The success of this lesson was contingent on the students doing their homework the night before; while the homework wasn’t long or necessarily hard, it prompted students to research a specific Enlightenment thinker and create a list of his or her thoughts and ideas.  The students needed to use this information to guide the activity planned in this lesson.

However, the activity proved to be virtually impossible as more than two thirds of my 4th hour class failed to do their homework. This lack of preparedness was instantly evident to me during the bellwork activity. Instead of responding to the bellwork response question and sharing their findings with their group members, students were doing last-minute reading; some students had no idea who their Enlightenment thinker even was. This gave me enough time to recognize the potential difficulties of this lesson and begin brainstorming on ways to counter these problems.

My first response was to try the activity anyways. I knew it would be more difficult, but I thought the activity important enough to plow through, regardless of how painful it might be. However, almost instantly, it was clear that the activity was not effective and not benefiting the students in any way. In the middle of the activity, I regrouped and had students return to their seats; I decided that since so many students did not know the material well enough for the activity to be effective, I needed to give the students the material in the form of a lecture.

So, in my 4th hour class, the lecture replaced my well-planned, fun activity; this proved to be a good decision because the students were able to receive the necessary information, something that probably would not have happened if I had continued to plow through the activity.

However, for my 5th and 6th hours (who had fewer students with special needs), I decided to try the activity again; these students tend to be higher achieving and I knew that more students would have done their homework and would be prepared to discuss the material. Though, drawing from my experiences 4th hour, I knew changes needed to be made.

In between classes, I quickly made name cards for each group’s thinker. This helped the class recognize which thinker was which, prompting the discussion to be clearer and more effective. Similarly, I had each group introduce themselves before we began the activity; that way, the rest of the class had a basic idea of who each thinker was and what he or she believed.

Then, I printed off “Agree” and “Disagree” signs for the students to use during this activity. This prompted all students to actively participate in the discussion; it also made each group’s ideas instantly known to the rest of the groups. Similarly, when discussing each statement, I only asked each group who “disagreed” with the statement to explain why they disagreed, making the activity more efficient and less repetitive.

These changes I made (as well as the changes that came naturally due to having a new set of students) proved to be very helpful and made the activity much more effective. In 5th and 6th hours, the activity was very successful: students were engaged in the activity, actively sharing their ideas and opinions.  By the time the lecture came around, the students already were familiar with much of the information; students supplied essentially all of the information, allowing the lecture to become more of a discussion or a quick review.  All in all, the lesson in 5th and 6th hours was as successful and effective as I had initially hoped and planned on.

My experiences during this lesson taught me the importance of being a responsive teacher.  If something is not working, it is important that the teacher responds to the circumstances and the needs of the students and tries something new. While it can be disappointing to have to throw out a lesson that had taken hours to plan and prepare for, the needs of the students are more important and it is the responsibility of the teacher to respond to those needs on the spot. Similarly, making changes between classes is also very important; each class will bring with them their own unique needs and demands.

Furthermore, this lesson also taught me the value of knowing your students. Knowing that 4th hour has more students with learning disabilities and more students who tend to not do their homework, I foresaw that the activity may not go as well with that class. I had planned on lecturing anyways, but I knew that if needed, the lecture could become the bulk of the lesson, and may be more effective with this group of students. Similarly, knowing the higher level of achievement in my 5th and 6th hours, I knew that I should try this activity again even though it was not successful previously; I knew that these students would be prepared and would find an activity like this meaningful and engaging. The lesson ended up being a huge success in these two classes, just as I had planned.